This year’s DefCon may have been the most anticipated for me yet and it certainly lived up to expectations.  For the last few years, we’ve discussed the possibility of a psych0tik meet-up at DefCon, and with a little bit of luck this year we were able to make it happen.  In addition to being DefCon 20, we had all 3 core psych0tik members as well as a number of our oldest local members show up.  As expected, hacks and shenanigans ensued.

For me, the beginning of the trip to Vegas this year was extremely hectic, with work deadlines as well as life’s little problems looming I rushed to get to the airport.  There I met up with pr0phet9 and TheRainman and we just made it to our flight.  At the airport in Las Vegas we met up with richo, and managed to get a ride to a casino near our hotel.  Rather than heading to the hotel to unpack and set down our luggage, we simply went into the Rio and met with Purgatory and some other psych0tik members at a lobby bar, with excellent… talent.  We knocked back a few drinks there waiting (and worrying) for carbon’s arrival.  It wasn’t long until carbon arrived and finally the crew was all gathered together, and fun times could begin.

Along with the excellent camaraderie, this year’s DefCon itself was excellent.  The badge line took roughly 2 minutes, and we weren’t even early.  With the exception of one or two talks, things were easy to get into as long as you didn’t mind floor space in some cases.  Vendors brought their A-game and there was a great showing across the board.  While I’m still trying to get the Rio memorized as well as I had the Riveria, I’m certainly enjoying the change.

As the years have gone on, I’ve grown less interested in seeing every talk and instead focus on a few I’m particularly interested in, spending the rest enjoying the social/community aspect of DefCon.  I caught a couple excellent discussions this year including Bruce Schneier answering questions (and giving away copies of his new book [1].)  He’s an expert I really enjoy reading/listening to, as his years of experience and unique perspective allow him to respond even mundane questions with interesting and useful answers.  I also got to see (by accident as it turns out), the panel on Anonymous and hacktivism.  It was a bit of kismet that we stumbled into that talk while looking for richo and carbon, as I had wanted to see it when we did our original “what talks are there”, but had forgotten when and where it was.  The panel[2] contained a few lawyers, a journalist, a  anthropologist, and a member of the EFF[3].   The panel started with each member giving a short narrative about hacktivism, with a focus on Anonymous.  Afterwards, the audience was allowed to ask questions (myself included!)

This year’s badge was electronic again, making for some extra fun times.  I typically haven’t done much with the badges, but with richo around to motivate me a bit more we did some hacking.  He found a tool chain[4] for writing code to the device, and luckily I had remembered to bring a mini-USB cable.  The language, spin[5], was a bizzare mixture of programming styles, clearly aimed at allowing new programmers to use the device.  Once we sussed out the way it was meant to work, with some help from pr0phet9 and TheRainman’s EE background, we were off and writing code.  Mostly we played with changing the display, letting us write our names if we oscillated the badge, which was fairly simple. I’ve started to play with reading direct input from the USB port, to see if commands can be easily passed to the spin code uploaded.  The setup supposedly supports a full shell and when a VGA port is soldered on, has video output.  Sounds like with a bit of hardware hacking, again with the help of our resident EE experts, we might be able to turn this into a more simplistic version of the R-pi, with a much cooler look.

The number and variety of vendors this year was staggering.  Tons of shwag, technotoys, lockpicks and more.  The lockpicks where of particular interest to me this year as I finally discovered the brand of a particular pick I found years ago.  The SerePick[6] is by far the best pick I’ve ever used.  The small twist-and-bend along with the rake designs make for an easy job.  With a name in hand, I went to every booth, event and person who looked like they might know where to find them.  Finally I was directed to a booth that at least had patches with the logo.  I was informed they only had a few and they had to be asked for directly, which explained my difficulty finding them.  I got myself a set of two new SerePicks to compliment the one I already had.

A large part of the trip was a blur, as we moved quickly from spot to spot, activity to activity which frequently involved lots of walking in the heat.  As we’d stroll by things, one of us would pick up a nick-nack or t-shirt.  We’d take a glimpse at the “hack our robot” booth, or watch an Egg-bot[7] write my name on a ping-pong ball (misspelled, that adds value, right?)  We bumped into a number of people, most of whom we didn’t know, and had a number of enjoyable (and a few totally brutal) interactions.  Partly as the result of planning and partly from spontaneity, we ended up in a tattoo parlor within the Rio and the official psych0tik tattoo was birthed upon richo, pr0phet9 and myself.

With carbon around again, we decided we had to hit up the IOActive party like we did for DC18.  This year it was outside at the pool of the Rio with Infected Mushroom preforming.  They also had similarly bend-y girls doing acrobatics, just like before.  The party itself was a lot of fun.  Hackers for Charity were selling cigars for donations, and I happily took pleasure in those.  I did spill my beer all over the nice guy selling them (if you happen to read this, definitely get in touch with me and I’ll buy you a few rounds next year), but he took it in stride.  We got to talk with a bunch of people, some sober and some less sober.  Unfortunately, we had early-ish flights on Sunday, so we had to leave the party at a reasonable hour to ensure we didn’t sleep through our shuttle back (which I nearly did.)  Being the 2nd IOActive[8] party I’ve been to, I feel obligated to say that while I have no clue what they sell, you should all go buy at least one barrel of it.

Without a doubt, this years DefCon was the best yet.  DarkTangent put on an excellent conference, architected the best I’ve seen in years, and getting to wander around that hacker’s wonderland with some of my oldest, and hardest to see friends certainly added to the appeal.  I know I speak for most (if not all) of us, that we were beat by the time we got home.  Nights of little or no-sleep, very little solid food (I can get free scotch anywhere, but I can’t even find a freakin’ pretzel?), and constant activity wore me out, but the fun was totally worth it.

So with DefCon XX complete, it’s time to start planning for next year’s meet-up at DC21.  Definitely leave some notes in the comments or join one of our mailing lists if you want to link up with us next year! 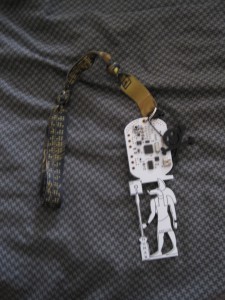 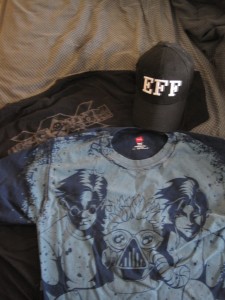 Front and back of this year’s DefCon shirt, as well as the sweet EFF hat 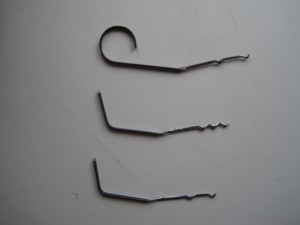 On the top is my original SerePick, the bottom two are the new ones I picked up.  The picture isn’t super clear, but they’ve got a twist at the bend in them which I like a whole lot when picking. 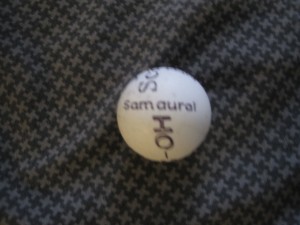 The DefCon ball, made extremely valuable by the misspelling of my name.  Feel free to send me bids :P

Here’s a fuzzy, terrible picture of the “official” psych0tik tattoo.  Maybe someday I’ll get a better shot of it..

I like computers... A lot. So I tend to spend a lot of time doing varied things with them. Often you'll find me playing with Python or PHP, fighting with operating systems, ranting about some off-the-wall concept, or preparing for zombies.
View all posts by samurai →
This entry was posted in Articles, psych0tik News and tagged DC21, Defcon, lock picking, psych0tik, spin. Bookmark the permalink.