Another year, another Defcon has passed. This year I went with CarbonLifeForm (who helped out with this post) and we attended talks, mingled with fellow enthusiasts, spread the psych0tik word, and enjoyed general debauchery. I was asked to take some photos for some friends who couldn’t attend this year, so I’ve pulled those together with some comments and added them to this post.

This year was quite busy, with far more people than have attended Defcon before. Unfortunately, that meant needing to wait in lines during other talks, so I’ll be looking forward to getting the video and being able to watch some of the ones I missed. A large number of attendees also made for a shortage of badges. This shortage resulted in a the “Lamer skybox party” Friday night for all those who didn’t get a proper badge. For a last minute party, the guys who put it together did a great job. I’ll be looking forward to hitting it up again next year.

Of the talks I saw, I particularly enjoyed the nmap scripting engine talk by Fyodor and the Razorback[2] debut by the Sourcefire guys. As always, Fyodor has been scanning the internet and this time he aimed nmap and a few nmap smb scripts at Microsoft’s net-blocks and showed us the results.

Razorback is Sourcefire’s new open source project, that’s built to correlate and process security events. It allows ambiguous data types and provides a framework for events to be dissected and analyzed by modules. Each piece of data is passed around to the various “Nuggets” for processing. It’s a neat system and I’ll be looking at writing some Nuggets to add to the farm.

In support of Gregory Evans and Ligatt, I wore a HackerGearOnline shirt on Friday. I was happy to see the con shirts labeled “Worlds #1 Hacker (conference)”, also paying due tribute to Mr. Evans. I didn’t manage to pick up one of the shirts, so I don’t have a picture of it.

Outside of being a bit over-populated, this year’s con was great. We enjoyed a number of interesting and entertaining talks and of course participated in the Defcon/Vegas shenanigans. Our flights were early and we missed closing ceremonies, but the announcement was made that Defcon would be moving from the Riviera to the Rio for Defcon 19[3].

This year’s badge was much more interactive than in years past. Including a mini-USB port and multiple challenges[1] 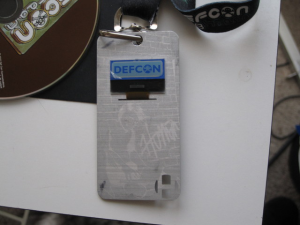 The following are a few shots of vintage hardware. This room (and a good bit of the hallway outside the room) had that “data center” smell. Directly below is a picture of the PDP-11[4]. 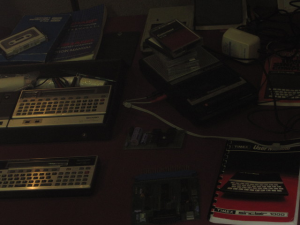 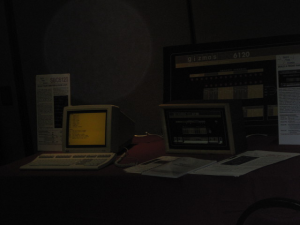 A shot of the wall-o-sheep, as always, lots of great pwnage. 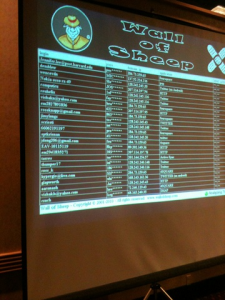 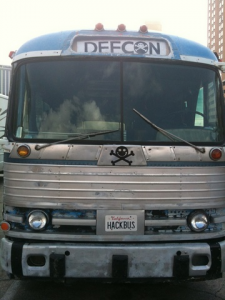 Here’s a picture from Fyodor’s talk. If you can’t tell, this is nmap output for a Microsoft IP address.

As much as I try to keep this blog away from advertising, I’ve got to give it to IOActive for throwing a great party Saturday night. 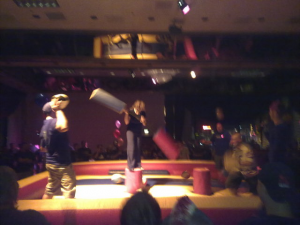 A (now) empty bottle that ended up covered in Defcon18 stickers. The official booze of Defcon? 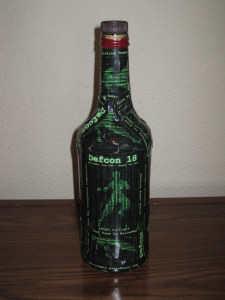 This one turned out to be off topic. I found this sticker on the dresser in my hotel room. I figured it was something con-related, but getting home and looking it up, it turns out to be a punk rock band. A bit of promotion for them too I suppose

I like computers... A lot. So I tend to spend a lot of time doing varied things with them. Often you'll find me playing with Python or PHP, fighting with operating systems, ranting about some off-the-wall concept, or preparing for zombies.
View all posts by samurai →
This entry was posted in Articles and tagged Articles, DC18, DC19, Defcon, hardware, Lamer party, Ligatt, media, Microsoft, nmap, PDP11, psych0tik, razorback, smb, sourcefire. Bookmark the permalink.

One Response to Defcon 18 – photos and followup