I’ve been working on getting Juggernaut up and running for a couple weeks now and have promised a few people pictures and a summary of what’s going on… so here we have it.

I was lucky enough to be given the majority of the hardware by a coworker who had recently upgraded.  This started me out with the case and motherboard, along with 6 Gigs of ram, a Core2Duo @3.00Ghz, and dual nVidia GeForce 9500 GTs. I had to ditch the IDE CD/DVD drive and use a SATA device, as I’ve only got 1 IDE bus to work with.  The motherboard has 7 SATA slots, so I’ve been stuffing as much SATA into the machine as I could.

For storage, I went a little overboard.  As the primary drive, Juggernaut uses a 40G IDE drive.  On top of that he’s got another 41G IDE (a slave to the former), a 500G internal SATA drive (salvaged from a laptop), a 3T external USB drive, a 300G external firewire drive, a 80G external USB drive and finally a 3.5″ floppy drive.  I’m still looking at getting something to support SD cards, so that this box can interface with pretty much any media around.  The 41G IDE slave also contains a Windows ME install that will try to boot, but fails horribly.

On top of the usual compute-y  things, I’ve also added a few unique input sources in the form of a USB attached tempurature, humidity and pressure sensor (USB-THB) and a RS232 attached (via a USB converter) 270 degree dome security camera.  Both of these were designed by Z.Monkey.

Finally hooked this all up to my KVM to run through my old CRT and purchased a new router (Buffalo makes a nice one that comes stock with ddwrt.)  I’ve installed the AMD64 build of Gentoo and have all the peripherals (minus the security camera) working. 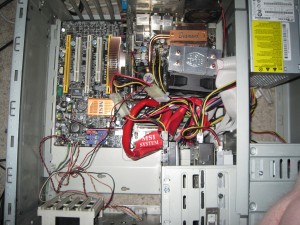 Straight down into the case. 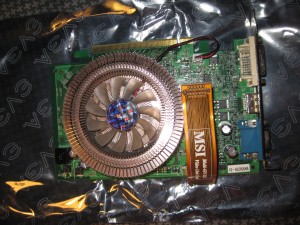 One of the graphics cards 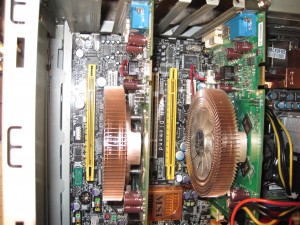 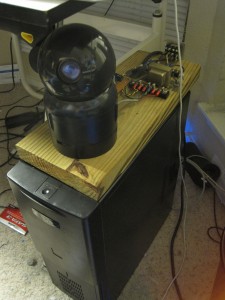 Side view with camera 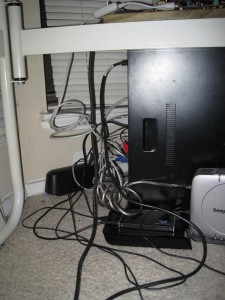 Side view of the external storage cluster 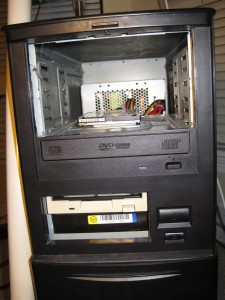 Front view.  The small SATA drive is mounted to the DVD drive with duct tape.  You can also see the floppy drive and one of the internal IDE drives.

Security camera mounted to the control board (courtesy of Z.Monkey) 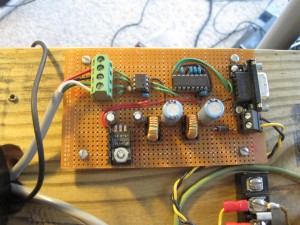 Close up on the control circuit 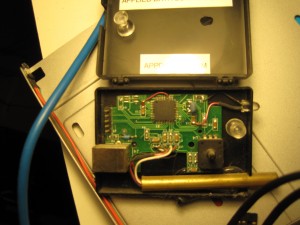 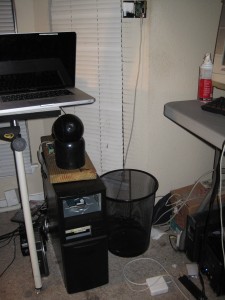 Finished setup, with the security camera on top and the USBTHB on the wall 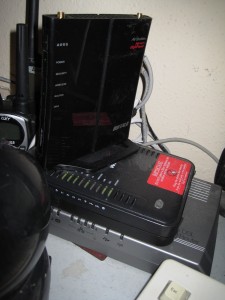 Routers, including the new Buffalo router with ddwrt 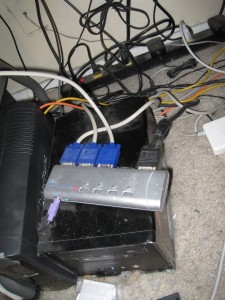 KVM, as well as Storm and the UPS

I like computers... A lot. So I tend to spend a lot of time doing varied things with them. Often you'll find me playing with Python or PHP, fighting with operating systems, ranting about some off-the-wall concept, or preparing for zombies.
View all posts by samurai →
This entry was posted in Articles, Hax and tagged Articles, Buffalo, ddwrt, Gentoo, Hax, Juggernaut, Projects, storm, USBTHB, Windows ME. Bookmark the permalink.